Author Interview with Sarah Rodecker and Helena George for The Pirate Hunter Chronicles!

Hey, guys!
I know it has been a long time, and I have a lot of explaining to do about my absence, but I have a treat for you all first. The last time I posted was about a cover reveal, and today you can hold that very book in your hands! The third book in The Pirate Hunter Chronicles: Rumors, Reunions, and Revenge - by Sarah Rodecker and Helena George came out! I am part of the blog tour to celebrate! 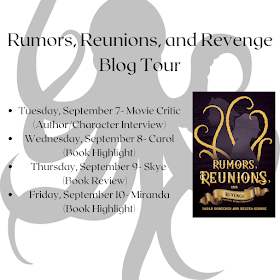 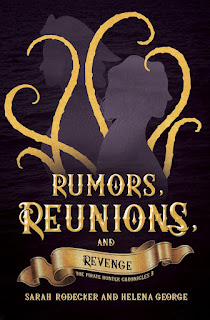 I believe I know the story, but can you guys tell my readers why you decided to write a story involving pirates?
Sarah: Uhh, I think it was just because Helena had a story lying around about pirates and that’s the one we decided to write?
Helena: Yeah, pretty much. I watched Pirates of the Caribbean in 2010, wanted to write a pirate story, never finished writing it, and then we revived Jay Hill and the Red Wind for a wild attempt at writing something together.
If you were part of the Pirate Hunter Crew, what would your role be? Or even, which character do you think is the most like you?
Sarah: I think I would be a combo of Heather and Adi? With some Hawthorn mixed in? I would probably have a role similar to Heather’s, as her’s is what I do in real life.
Helena: Probably Sandaline. Like, kinda ended up there by accident, and somehow knows more about sailing than half the crew put together.
This might break hearts, but can you tell me your favorite character from The Pirate Hunter Chronicles?
Sarah: My favorite character is the High Dragon. She’s spunky, hilarious, and has a no-nonsense attitude that I love to write.
Helena: Justin. I share his love for tea, for being rather chill during most situations, and casual ignorance for many things. He is so fun to write, like one of those characters that you never know quite what they’re going to do.
I echo Helena, because Justin is totally my favorite character. From the first time I met him on Helena's blog I knew he would be, and he has never disappointed.
In your books you have magical creatures, rolicking good times on the wild waves, dangerous missions and thrilling adventures while breathing in the fresh sea air. I want to know, what is your favorite part of worldbuilding?
Sarah: My favorite is coming up with sea creatures and things like that. We base most of our creatures off of the mythology in our world, but change it up to make it fit the fantasy world. Coming up with those fresh ideas are some of my favorite brainstorming sessions! They’re usually filled with squealing and googling and all the fun stuff!
Helena: Creating the assassin clans, their histories, and their “vibes” has been really fun! We get an idea of this in the first book, where a del Mankayl assassin and an Aladale assassin sometimes butt heads and sometimes are strangely loyal to each other. And then in the second book, we really revealed a lot of the darkness that goes on in these clans (especially for the del Mankayls). And in this third book, we get to meet someone from a new assassin clan!
Without spoilers, what has been your favorite type of adventure that the Pirate Hunters have gone on?
Sarah: *Grins* My favorites are the ones the characters go on in book 4. I won’t give anything away, but they cover places that we haven’t explored in the series yet and it’s really awesome to open up those doors.
Helena: I’m with Sarah...really excited for book four. But, honestly, Ravin’s emotional journey in the second book is probably my ultimate favorite. I cry every time I read chapter 10 (I actually wrote it before we’d even started book two, and we barely even edited it after the first draft), and chapter 30...phew, that one was really moving to write as well!
To wrap up, how does it feel to only have one book left in The Pirate Hunter Chronicles?
Sarah: *goes and finds a corner to sob in* But seriously, it’s a bittersweet moment for me. I’m sad that we’re closing this chapter in our writing lives, but I’m also so excited about everything that’s going to happen in book 4. I can’t wait for y’all to get to read it!
Helena: In one sense, I’m excited, because now I can place all four books on my shelf and move forward with The Red War Annals. I can’t wait to share Marywyn and Duren and the Bards and all the epicness that is those books.
But again...I love Ravin and Adi and Justin and Gerrard and all the other Pirate Hunter characters. I will miss them. And it feels strange, honestly, to not be brainstorming what their next adventure is. After 2ish years of thinking about ships and sails and sea creatures...it will be really odd to no longer be writing about their journeys. And I will miss them a lot. 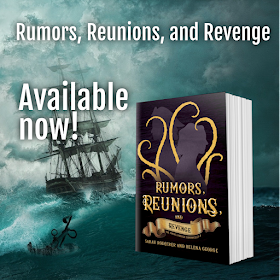 This is MC again. I don't know about you guys, but I am now really eager for book 4! In the meantime, go check out Rumors, Reunions, and Revenge, and the rest of The Pirate Hunter Chronicles if you haven't read them already.
You guys are in luck, too, because there is a giveaway! It is going right now and will end on Saturday, September 11. It includes,
-Signed copies of The Pirate Hunter Chronicles books 1-3 and all coordinating swag packs
-A bag of looseleaf tea
-A kraken mug
-A kraken teaball
People can enter by signing up to receive the Order of the Pen Press newsletter (anyone who is already signed up is automatically entered). Additionally, anyone who enters the reel competition on Instagram will get an extra entry. Everyone who helps out during the blog tour gets an additional entry.
HERE is where to join the Order of the Pen Press newsletter to be a part of that!
How epic is that??
I'm going to get out of here so you guys can bask in the glow of this book. I'll be back soon for full explanations, but in the meantime, safe sailing!
Chloe the MovieCritic
Chloe the MovieCritic at 3:00:00 PM
Share