The 2021 Legends of Western Cinema Week This or That Tag!

Howdy, y'all!
I hope you're all wearing your cowboys hats because it is currently Legends of Western Cinema Week! It has returned and is once again hosted by Olivia, Heidi, and Hamlette!

The party has been going wild with fun the last few days! There have been games, giveaways, and reviews a plenty! I'm jumping on here quickly with my tag answers that the lovely ladies have created the questions for. I had hoped to review a movie for this, too, but time rolls away like drifting tumbleweeds.
The 2021 Legends of Western Cinema Week Tag:
1. Western movies or western TV shows?
I love TV shows because they give more character growth. That's what we all think, right? Well, so far with the western TV shows I've seen, that's not been the case. All I know is that everybody's gettin' out of Dodge.
I prefer Western movies because they give you all the good feels of a western and you can enjoy it for two hours then be done. Plus they get creative with how to wrap up the plot. Sure, "creative" usually means a shoot out, but that's expected, I guess?

2. Funny westerns or dramatic westerns?
Considering that one of my top ten movies of all time is a western that happens to be the funniest movie I know, you would think that I would chose that one. Well, Support Your Local Sheriff (1969) is in a league of its own.
There is something about the word "western" that just demands to be dramatic, right? You picture towns on the brink of disaster and people riding off into the sunset, right? For the sake of today, I'm feeling more like a dramatic western, but I wouldn't be opposed if it was funny at the same time. 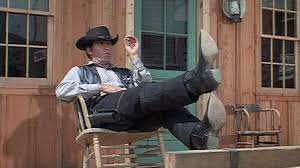 3. Westerns that focus on loners or westerns that focus on families?
This is the hardest question! I feel that a western heightens the mystery of a loner. I think most of the westerns I've seen have been with either that or found families instead of birth families. Usually other families involve too much feuding. But, sometimes that's just what I'm looking for! One movie that I saw long ago, where I think it was Night Passage (1957), was about brothers who were on different sides of the train tracks, so to speak, and I LOVED IT. I'm feeling too vague today to make a definite decision.
4. Male-centric westerns or female-centric westerns?
Well, if I had seen a female-centric western than it might be my new favorite thing, but as of now I can only truthfully say that I've only seen male-centric westerns. Does anyone have any suggestions on how to change this?
5. 1930s to 1960s westerns or 1970s to 2020s westerns?
Some westerns from the 1930s to 1960s have Jimmy Stewart, so that's the obvious answer. 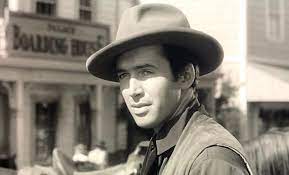 7. Family-friendly Westerns or edgier Westerns?
My instinct is always to go with more family-friendly westerns. Most of the edgier westerns that I've seen are that way for no reason, you know? Now if we were dealing with a serious topic then I would love to see a western about it, but handled well.
8. Straightforward good guy or conflicted hero?
Usually I want all the conflict in the world. Which is a bizarre statement, I know. But in Westerns it is so comforting to have someone who is steady and secure in a terrain that is prone to treachery. Now I'm just trying to sound poetic. But really Thomas Jefferson Destry Jr. and Jim Craig are such good and lovable characters! Then there is also Ransom Stoddard, who is so deeply good and just yet has conflict aplenty. So, why not both?
9. Historically accurate Westerns or Westerns that aren't afraid to take some creative liberties?
I am probably wouldn't know the difference, actually, so give me all you've got!

10. Bittersweet or happily-ever-after endings?
Bittersweet! But only when it comes to this genre. I like Westerns to show me that there was a toll paid for what happened. If the "bad guys" are just terrible shots and everyone gets what they wanted, it feels like a cop-out. There are some times that I definitely wanted a happy ending and just get too sad about what happens (like a certain Alan Ladd movie from 1948), but usually my heart is aching in a satisfied way.
There you have it! This party is going to be ending soon, so check it out! Thank you again to all of the wonderful hosts! There are so many stunning posts entered here, I recommend checking them all out!
What do you think of my answers? Any western recommendations? As of now, that I can count off the top of my head, I've seen 37 films and 2 tv shows that fall into that genre. I'm someone who usually loves happy endings, so does anyone know why I prefer bittersweet endings in this genre? Has anyone seen Night Passage and can help confirm if that's the movie I have seen?
See you around, partner!
Chloe the MovieCritic
Chloe the MovieCritic at 7:45:00 PM
Share