Today I will be reviewing a very famous and popular adventure movie starring someone who got his start in my favorite movie, Star Wars (1977). Crack your whip, and let's swing into the action!

Appologies that these pictures are all really in bad condition and small, my computer was not liking me today! 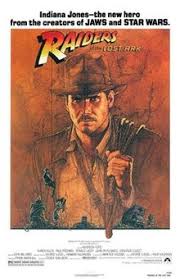 In 1936, an intercepted message shows that the Nazis are looking for the Ark of the Covenant to become the most powerful army. Archaeologist and professor Indiana Jones decides that he needs to find it before they do, so he seeks out an old friend who might have a key to the whereabouts of the Ark. Going to Nepal he learns that his friend is dead, but his daughter might still have what he is looking for. Joining with her they travel to Egypt and other places looking for the holy object. Which will find it first? Or was it never meant to be found at all?

Genre: Adventure, Action.
Length: approx. 115 minutes.
Costumes: 6, nothing really great and there are a few times when someone isn't wearing a shirt.
Script: 7, there is some name calling, a few bad words, and a name being taken in vain.

'"I'm working on it, I'm working on it!"
"Well, whatever you're doing, do it faster!"'
Crew:
Directed by: Steven Spielberg.
Written by: Lawrence Kasdan, George Lucas, & Philip Kaufman.
Starring:
Harrison Ford as Indiana Jones. "I hate snakes!"

Denholm Elliott as Dr. Marcus Brody.
Alfred Molina as Satipo.
Wolf Kahler as Colonel Dietrich.
Anthony Higgins as Major Gobler.
Vic Tablian as Barranca & Monkey Man.
Don Fellows as Col. Musgrove.
William Hootkins as Major Eaton.
Cinematography: 8. Not the best that I've seen, but there is always a lot going on and it is handled pretty well.
Cinematography by: Douglas Slocombe.

Music: 10! Okay, story time. It was with this movie and Pirates of the Caribbean that I first realized hat there was music playing during movies. One time my dad got a birthday card that when you opened it the score from this movie played. My sisters and I loved that card and would open it a hundred times a day until it finally drove my mom crazy and she had to put it where we couldn't get to it!
Music by: John Williams.
Notes: There are some Easter eggs in this movie. I've seen them, but this last time through I blinked at the wrong time and missed them. I'll give you a clue, this was written by George Lucas and look in the hieroglyphics.
Another thing that my dad pointed out is that in one part they are measuring things and they had the wrong size. My dad noticed this because they said what height it needed to be and when they stood it up it was taller than Harrison Ford, when it should have been about his height.
Quotes: 7, standard lines, so not too quotable, but okay.

"Holy smokes, my friends! I'm so glad that you're not dead."
Oscars won: 4: Best Sound, Best Art Direction, Best Film Editing, Best Visual Effects.
Content: 5, there are spiders, snakes, skeletons and bodies, people being burned, blood, killing, smoking, drinking, suggestive things, & kissing. Someone dies by being impaled and there is a lot of blood (I wrote it in my notes as someone being 'spiked') as well as someone walking into an airplane propeller. Okay, there is one part that I have never watched, because Indy yells, "Close your eyes!" so I always do. I'd say it's about a three minute section and from the sounds of it and what my sister tells me (because she didn't close her eyes) it is really violent and involves a lot of death. She also thinks that it is important to the story which makes sense to me because I am always very confused after that.

Originality: 7. This movie is a cultural thing because there are quite a few famous scenes that are referenced to a lot. I just recently learned that some of them were actually based on some Uncle Scrooge comics, which is why I'm taking off a few points. It is also Biblically incorrect because in 2 Maccabees 2:4-8 it says that Jeremiah hid the ark of the covenant in a cave where no one could find it until God gathers his people together. I can let that detail slip, because the message of the movie is that the Ark of the Covenant:

"Is something that man was not meant to disturb."
Good For: adventure and action fans, Harrison Ford fans.
Age Range: This movie is rated PG, but never believe the ratings of 80's movies. There is a ton of violence, and I'm usually absolutely okay with that because it doesn't bother me, but there are some things in here that made me look away! One example is when someone who is driving gets shot in the arm and blood sprays onto the windshield. Because of this, and all of the other things I mentioned it the Content category, I would rate this PG-13. But, as always, it does depend on the person who is watching it.

'"How?"
"I don't know! I'm making this up as I go!"'
Bonus thoughts:
Sallah is my absolute favorite! I just have to mention him to give some credit.


This is my entry in The Harrison Ford Blogathon, hosted by Sat in Your Lap! When I saw this I knew this was the perfect time to talk about how he played Indiana Jones in Raiders of the Lost Ark (1981)! 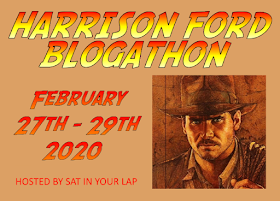 For the blogathon:
A really funny thing is that no matter what I tell my younger sister, she never believes me that Han Solo and Indiana Jones are both played by the same person! She has only seen bits and pieces of this one and her comments crack me up!

[My sister walks into the room]
Sister: Who's that?
Me: Indiana Jones.
Sister: No it's not! Indiana Jones has a beard and doesn't wear glasses!
Me: Yes it is, he's a professor. And when has he ever had a full beard?

[Next scene]:
Sister: Who's that now?
Me: Still Indiana Jones.
Sister: No, he looks different.
Me: Trust me, it's him.
Sister: But he's wearing weird clothing!

[Next scene]:
Sister: *gasps* There's Han Solo!
Me: I told you!
Sister: When did he get here?
Me: It's been him the entire time!
Sister: Nope, he just got here.

[Next scene where Indiana is wearing his usual outfit]:
Sister: There Indiana Jones is finally!
Me: *sighs*

It shows a good actor if he can fool my sister that many times. I think that Harrison Ford does a good job of playing Indiana, and I can't ever see anyone else playing him.


Check out this post HERE to see all of the other entries in the blogathon! Thanks to Michael for hosting!

Thanks to all of you for reading! Do you have a favorite scene in this movie?